OTTAWA -- Men who want kids may want to switch off their cellphones or let their partners do all the talking.

Results of a recent study led by a researcher at Queen's University in Kingston, Ont., suggest the electromagnetic waves from cellphones can lead to low sperm quality and decreased fertility in men.

"Our study is an eye-opener that electromagnetic waves may have an effect on fertility," says Dr. Rany Shamloul, a researcher in sexual medicine who led the study. "It's not a done deal, but it's a red flag that more research needs to be done."

Shamloul and his colleagues found cellphone use lowered levels of the luteinizing hormone, an important male reproductive hormone secreted in the brain.

"This may potentially have an effect on your ability to produce babies in the long term," he says.

The study, published in the online version of the journalAndrologia, followed 2,110 men attending an infertility clinic in Austria between 1993 and 2007. The researchers found a "significant difference" between the sperm counts of men who used cellphones over the study period and men who did not. "The initial sperm count decreased. Even the ability of the sperm to move decreased over time," Shamloul says.

Electromagnetic waves can affect cells all over the body, he explains, including reproductive cells, which are very sensitive to radiation. However, the frequency at which the radiation becomes damaging is still unknown.

Shamloul says followup studies testing for variables such as frequency, type of cellphone, the amount of use or where the phone was kept on the body are underway in Europe.

In the meantime, he says, people should be cautious when using cellphones.

"The evidence that cellphone radiation can damage sperm and DNA is growing," says Devra Davis, a researcher in environmental health hazards and founder of the organization Environmental Health Trust in the United States. Current safety standards are not sufficient, she says.

For example, cellphone tests for radiation do not reflect how cellphones are actually used. "Phones are never tested in the pocket of the shirt or pants, which is where most people keep them."

Republished from the Winnipeg Free Press print edition May 20, 2011 A24 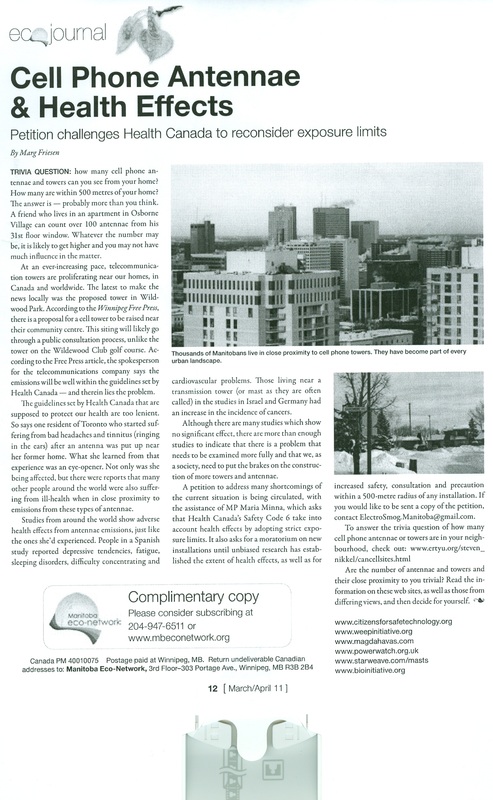